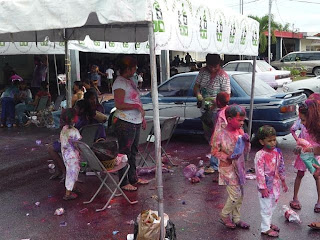 Phagwa is celebrated on the first day of the full moon in the month of Phagun (February to early March).
It came to Trinidad and Tobago with the arrival of Indian indentureship in 1845. The origin of Phagwa or Holi can be traced to the Hindu holy scriptures Vishnu Purana in which there is the story of an evil King Hiranyakashipu who wanted to destroy his own son Prahalad for worshipping God instead of he, King Hiranyakashipu. According to the scriptures, Hiranyakashipu then made a plot with his sister Holika to destroy the child Prahalad by fire, for being disobedient to him. Instead, Holika perished in the inferno while Prahalad survived, thus establishing victory for good deeds over evil ones. more here
Posted by Gillena Cox at 3:00 PM

It never suprises me when the Soul wins over, I like this very much Gillena :)

Interesting, I didn't know that there was a lot of Hindu influence in the Islands. I love dance, particularly Afro-Cuban, and Afro-Brazillian dance which I studied. You can exorcise/exersize a lot of demons that way, it is very soul cleansing, nice poem and post

In my travels I've learned that overall, people are the same and people want to be (and are) good.