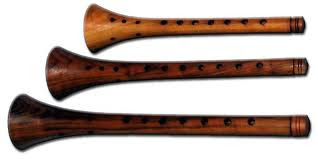 The FOURTH YEAR'S celebration OF 'The 12 days of Christmas at Lunch Break'; continues, thanks for celebrating with me. All the prose (ie. story of) 'Anansi and The Twelve Days of Christmas' © gillena cox 2011

And Anansi,once again, found himself there in the rainforest; but somehow, he was back in Latin America; now his trek had taken him to Brazil, he sensed somehow he was near the coastline and he sighed from exhaustion; then suddenly he heard a wailing sound, as if someone was blowing a reed pipe; Anansi's strength surged, he dropped his back pack, and stood straight as a rod and listened, without daring one step which would be to much noise. He listened, the music seem to be approaching him, coming nearer and nearer until, there! ten wizened griots their pipes held at their lips and the saddest of strains left their instuments. Then he heard their voices, all ten griots speaking together at once
" Anansi! Kwaku Anansi! what nonsense is this, of going back to the African Continent? Man its Christmas; a time to be opening presents with your childen, a time to be eating ham and drinking sorrell with Mrs Anansi; a time for parang..." Anansi gulped, then he heard the sweet voice of Mrs Anansi singing
"on the eleventh day of Christmas, my love gave to meeee...eleven pipers piping...ten lords a-leaping...nine ladies dancing...eight maids a-milking...seven swans a-swimming...six geese a-laying... five gooold rings.........four colly birds...three french hens...two turtle doves and a partridge in a pear treeeeee"

--Meanwhile in Germany as reported by Ralf Bröker

on legs and hands
Daddy becomes
a donkey

--And in Trinidad and Tobago as reported by Keith Simmonds

groups of carolers
parading the streets
to spread the gospel

--And in Canada as reported by Lorraine Renaud

Wind throws him up
gently
to another patch

Poems and images; remain the copyright of the individual contributors


OTHER INTERESTING LINKS
Instruments of the Renaissance

Wind throws him up
gently
to another patch

Lorraine thank you for sharing a verse, i'll edit and include


Good write-up. I definitely love this site. Keep it up

This information is very good
I, really helped by you, because I have shared interesting things like this, and indeed I am looking for :D

thanks, his article is very helpful

Thank you, the article is very helpful, hopefully this article is useful for all.