A total eclipse of the moon occurs when the Earth's shadow falls across the Moon
Eclipses occur only at full moon, (but not every full moon) when the sun, Earth and moon are in a perfect line.
Next Total Lunar Eclipse Dec 21st 2010

We in Trinidad and Tobago were able to view the Total Lunar eclipse february 20th
from about 9:40PM until about midnight ; with Saturn also visible .
By 11.51 the moon was completely covered a reddish colour.

eclipsing moon--
in the stillness of tonight
as we watch

More For About Lunar Eclipses The welcoming sign at the Historical site of Lopinot is paled by the Immortelle trees blooming in the mountains.
It’s a cool Sunday afternoon, no bird whistles, no swishing breezes just that quite tone which nature uses to whisper to our hearts.
At The La Reconnaissance estate, the voice of our tour guide fills the afternoon with the tales of Charles Joseph Count de Loppinot (1738-1819) "Loppinot was a young knight who rose to the rank Lieutenant-General in the French army. He left France to serve time in the North-American French colony of Acadie (which is today combined with the Canadian territory of New Brunswick, Nova Scotia and Prince Edward Island). His service and travels led him to Louisiana, the Caribbean- Jamaica, Santo Domingo (known as Dominican Republic and Haiti today), and Trinidad…”
He was soldier, voyager, slave owner, planter, landowner.
Memorabalia at the site includes the grave sites of the count and his wife. There are no photos of him but a photo of his ghost takes a place of prominence in the small museum, as well; well preserved furniture from the 19th Century, alongside parang musical instruments of present day made by residents. "Lopinot is the home of Parang" boast our tour guide"and parang is part and parcel of every day life; sung at wakes, funerals, birthdays, weddings; not only during Christmas Season ".
He leds us in a sampling of his parang expertise and we join in, singing lustly, filling the afternoon with the musical hearbeat of the people.

near the cashew tree
on a picnic bench
busy ants

Lopinot is located about five and three quarters miles north of Arouca. 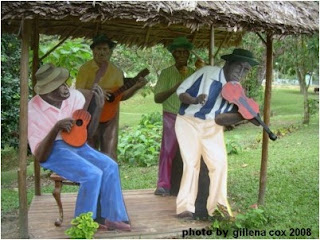 Saint Valentine’s Day
There are varying opinions as to the origin of Valentine's Day.
Some experts state that it originated from St. Valentine,
a Roman who was martyred for refusing to give up Christianity.
He died on February 14, 269 A.D., the same day that had been devoted to love lotteries.
Under the rule of Emperor Claudius II Rome was involved in many bloody and unpopular campaigns.
Claudius the Cruel was having a difficult time getting soldiers to join his military leagues.
He believed that the reason was that roman men did not want to leave their loves or families.
As a result, Claudius cancelled all marriages and engagements in Rome.
The good Saint Valentine was a priest at Rome in the days of Claudius II.
He and Saint Marius aided the Christian martyrs and secretly married couples,
and for this kind deed Saint Valentine was apprehended and dragged before the Prefect of Rome,
who condemned him to be beaten to death with clubs and to have his head cut off.
He suffered martyrdom on the 14th day of February, about the year 270.
At that time it was the custom in Rome, a very ancient custom, indeed,
to celebrate in the month of February the Lupercalia, feasts in honour of a heathen god.
On these occasions, amidst a variety of pagan ceremonies,
the names of young women were placed in a box, from which they were drawn by the men as chance directed.
Other aspects of the story say that Saint Valentine served as a priest at the temple during
the reign of Emperor Claudius. Claudius then had Valentine jailed for defying him.
In 496 A.D. Pope Gelasius set aside February 14 to honour St. Valentine.
Gradually, February 14 became the date for exchanging love messages
and St. Valentine became the patron saint of lovers.
Although sending Valentine letters or poems dates to the 15th century and perhaps before,
the first mention of a decorative Valentine's Day “card” may be in the writings of Samuel Pepys,
a chronicler of domestic life in Charles II's reign.
He relates how “this morning came up to my wife's bedside…little Will Mercer to be her Valentine;
and brought her name writ upon blue paper in gold letters done by himself very pretty;
and we both were very pleased with it. But I am also this year my wife's Valentine.”
(Samuel Pepys, The Diary of Samuel Pepys, February 14, 1667)
In the United States, Miss Esther Howland is given credit for sending the first valentine cards.
Commercial valentines were introduced in the 1800's and now the date is very commercialised.
Valentine’s Day History
First Valentine Card