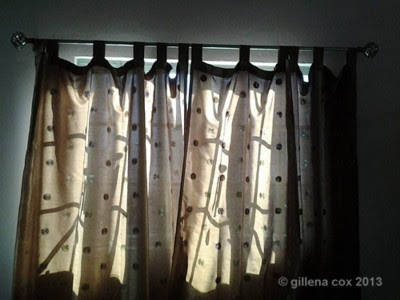 morning sunlight...
soundless shadows of wind chimes
behind the drapes


“Trees are poems the earth writes upon the sky, We fell them down and turn them into paper,That we may record our emptiness.”
― Kahlil Gibran

June ends today; to all Lunch Break visitors wishes for a happy and creative July


Linking today to Orange You Glad Its Friday And Sky Watch Friday And Friday Fences And Recuerda Mi Corazon - Haiku My Heart Friday And Scenic Weekends
Posted by Gillena Cox at 8:23 AM 32 comments: 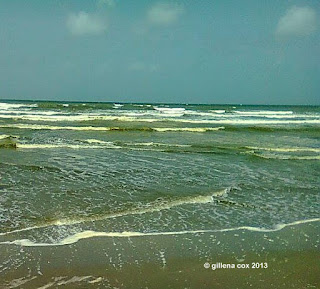 Atlantic Ocean...
also there in your depths pain
of greed and torture
--gillena cox

Linking today to Waterworld Wednesday #62 yr1 And
Outdoor Wednesday #223
Posted by Gillena Cox at 9:49 AM 22 comments: 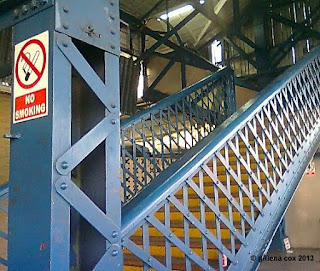 Linking today to Ruby Tuesday
Posted by Gillena Cox at 2:34 AM 18 comments: 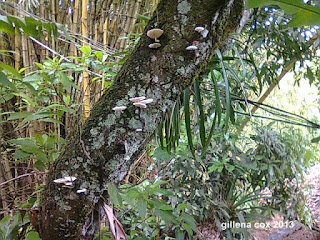 This photo was taken in May revisit 1177 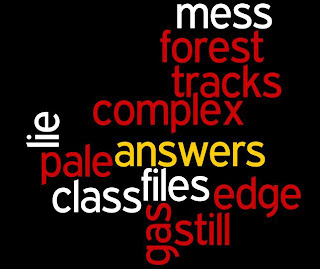 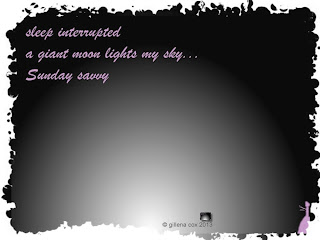 Its daytime Sunday, and the sky is azure, with no moon; however the awesome big roundish moon i spotted on Friday night was so remarkable i had to share. My calendars indicate the full moon tonight (in some time zones it would have been last night). Astronomy describes tonight's full moon as a perigee-syzygy; some folks say a Super Moon; the next one will be August 10, 2014; revisit Super Moon 2012

Last Saturday, June 15th, The Nalis St James book club ventured out on a PTSC cross-country bus ride. We boarded the bus at the city gate terminus. Before leaving the compound, we were introduced to both our driver and to our guide, who assured us that our safety and satisfaction were their main concerns. We were each given a copy of a map to follow our cross-country progress.

Our guide shared with us several historical tidbits concerning PTSC compound and its environs.
This PTSC compound, housed the city railway station of 1842 where the trains ran from 1846 -1968; it still carries the country's oldest steps, and still carries its emblem TGR outside its Victorian styled edifice. Our journey started along the 'Bus Route'

The Bus Route or Priority Bus Route as it is known today was constructed from its terminus to San Juan 1977, extended to Curepe in 1979 then to Tunapuna in 1983.

Leaving the terminus: spotted ...the repairs area of the PTSC compound; ...the corner of Charlotte and South Quay (there a slave torture chamber used to be); ...Tamarind Square was an old slave market; ...flow of the Dry River built in 1786 using slave labour; ...Broadway (formerly Almond Drive used to be a lover's lane); ...The Port of Spain Lighthouse......a purple heart wood post dated 1842 associated with telegram lines; ...Angostura Building where our world renown bitters is manufactured; ...Fernandes manufacturer of rum and by products and largest warehouse in the country; ...The Picton area in the hills where two large WASA tanks carry a painting of our national birds; ...The Laventille Hills (formerly Laventilla-place of strong winds) hometown of the founder of the steel band Winston Spree Simon; ...former areas of Shanty town and Donkey City and a marker where a watering hole for donkeys used to be...

The path outline in red on the map, is my noted indication of the route and not a part of the map as given to us. 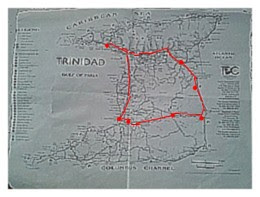 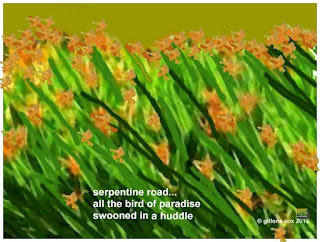 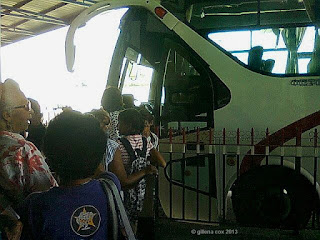 the empty bus...
miles and miles of road
to fill our day
--gillena cox 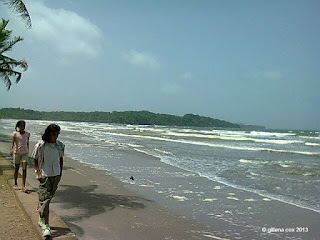 Linking today to Outdoor Wednesday #232 And Waterworld Wednesday #61 And Shadow Shot Sunday
Posted by Gillena Cox at 6:46 AM 26 comments: 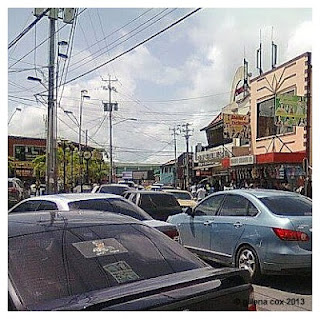 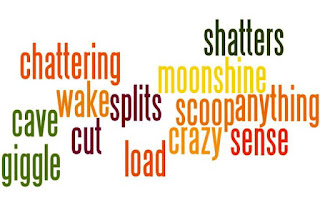 in the wake of chalk and duster
knowledge confounded

shatters the status
of anything
that makes sense

the chattering
at recess pours in
after the bell

they giggle
whispering the scoop
from cupped hands

trying to drive
the teachers crazy
their splits 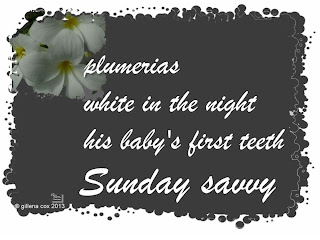 Today, Lunch Break salutes all fathers; wishing an especially lovely day to my son Khama Cox, and all others, celebrating fathers day, with the blessing of a first baby; Sunday Smiles 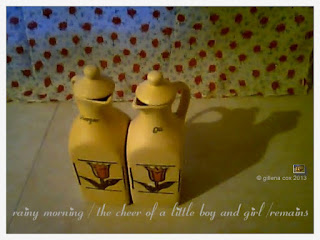 Yesterday, i welcomed an unexpected visit, from one of my first cousins - Gregory and two of his children - Justin and Sage; who though they live in Trinidad i do not see often, and too, one of my uncles - Francis who lives both in London and in Grenada; super lovely visitors; this morning i am entertained by the cadence of raindrops

rainy morning...
the cheer of a little boy and girl
remains
--gillena cox

Linking today to Orange You Glad Its Friday And Recuerda Mi Corazon - Haiku My Heart Fridays and also Shadow Shot Sunday
Posted by Gillena Cox at 8:02 AM 30 comments: 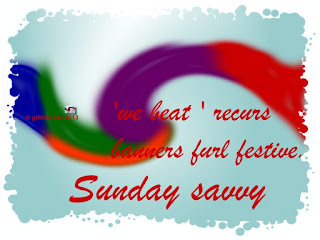 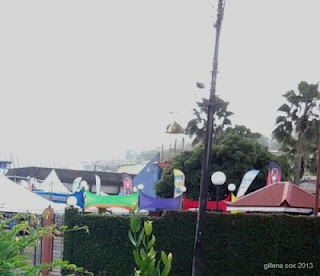 Linking today to Sundays In My City 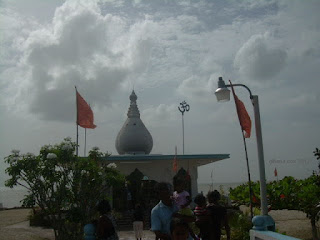 'Sewdass Sadhu Shiv Mandir'; this photo was taken in March 2012

visitors to the mandir
barefooted carry their awe
--gillena cox

spreading as far
as Hokkaido...
Buddha's law and blossoms
-Issa, 1812

Today is World Oceans Day Have a great day....much love 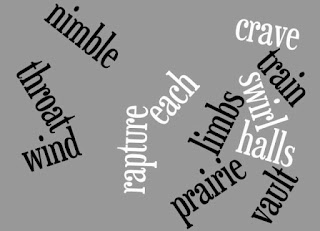 a bee
at the throat of a blossom...
sweet rapture

wind through praire sweeps
wild flowers this way that way

choo choo..
the train of thought
another busy day

they crave
the passion of
open fields
--gillena cox 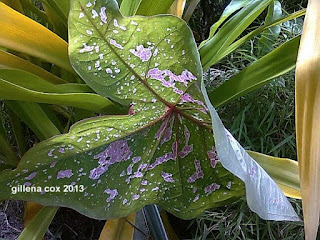 a statement of
caladiums...
again the rains
--gillena cox 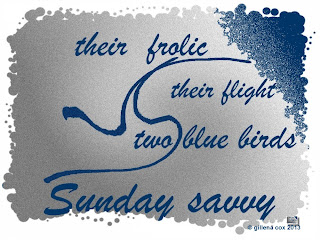 
Welcome month of June; today is the first Sunday of the Month of June, and the Sunday just after the homage of Corpus Christi. Corpus Christi in T&T is the rainy season marker, so to the pedestrian thought, without the instruction of the Met Office, the Rainy Season has started revisit Corpus Christi 2012 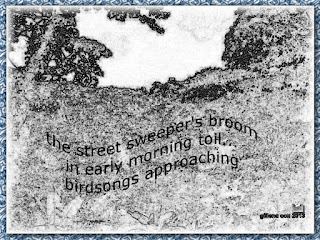 
Linking today to The Weekend In Black And White