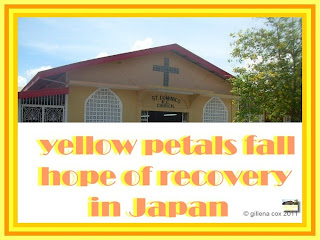 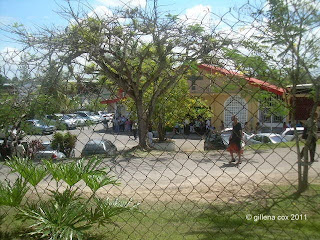 Penal plays a major role in the energy supply of Trinidad and Tobago, originally a rice and cocoa producing area; Penal (originally Peñeraal of a Spanish origin), it lies south of San Fernando and Debe, and north of Siparia, in south Trinidad.
---*---


Japan one week after the tsunami Japanese smiles are gradually returning
Posted by Gillena Cox at 8:37 AM

Thanks Gillena, for being with Japan now.
We need all the good energy possible.

. Japan - after the BIG earthquake .

...very heartfully said Gillena,
and we all wish... the yellow petals of hope. Silently. _m

yes we're all hoping for recovery in japan, nice post

Sorry Gillena san, I couldn't understand the meaning of Petal. More over it is difficult meaning "yellow petal"

Thanks to all you for stopping by;

Gabi thank you for the up to date Link

sakuo san the colour yellow for many Christians signifies hope
The tree in the photo is a 'Shower of Gold' tree, they are blooming now; and also the blossom fall is happening

We are all Japan.

Thank you Karol; glad you dropped in; much love...

You're a caring human being and it shows in your art :)

Lorraine glad you stopped by; much love...