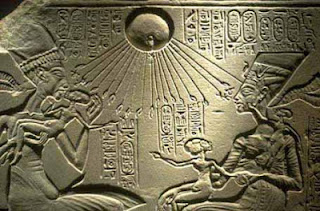 Pharaoh Amenhotep IV {Akhenaten) came to the throne in c. 1370 B-C. to reign as co-regent with his father Amenhotep III (c. 1397-1360 B.C.). He attempted a religious revolution in which faith was focused on one god - Aten (the solar disk).

[excerpt from The Great Hymn to Aten] courtesy Carpe Diem
When you set in western lightland,
Earth is in darkness as if in death;
One sleeps in chambers, heads covered,
One eye does not see another.
Were they robbed of their goods,
That are under their heads,
People would not remark it.
Every lion comes from its den,
All the serpents bite;
Darkness hovers, earth is silent,
As their maker rests in lightland

A beautiful distillation from Hymn for the Aten ... nice haiku with the essence of that part of the Hymn you have chosen. Thank you.

wow Gillena you never cease to amaze me....

Happy you dropped in Lorraine

Happy you dropped by Jazzy

Nice distillation, Gillena. I liked the original too.
Too bad about Mr. Linky at 'Tuesday" with the Toads. Your readers and friends are missing out. Have you tried it today? Some are getting listed.
..

Hi Jim thanks for dropping in. i will try the linky again at "toads" see what happens